Hey everyone! We are super excited to announce the schedule for the GOD BLESS AMERICA: THE STORY OF AN IMMIGRANT NAMED IRVING BERLIN Blog Tour which begins on Monday, June 4th!

The tour runs from June 4th-8th & 11th-15th, will have one stop per day, and will consist of reviews, guest posts, interviews, & excerpts! 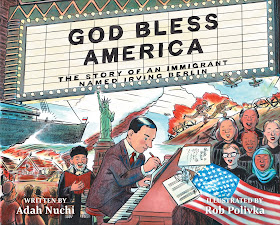 An inspiring portrait of an immigrant and the gift he gave his new home.

Persecuted as Jews, Izzy Baline and his family emigrated from Russia to New York, where he fell in love with his new country. He heard music everywhere and was full to bursting with his own. Izzy's thump-two-three, ting-a-ling, whee tunes soon brought him acclaim as the sought-after songwriter Irving Berlin. He ignited the imaginations of fellow countrymen and women with his Broadway and Hollywood numbers, crafting tunes that have become classics we still sing today.

But when darker times came and the nation went to war, it was time for Irving to compose a new kind of song:

A song for America.

And so "God Bless America" was born, the heart swelling standard that Americans have returned to again and again after its 1918 composition.

This is the tale of how a former refugee gave America one of its most celebrated patriotic songs. With stirring, rhythmic text by Adah Nuchi and delightful, energetic art by Rob Polivka, readers will be ready to hum along to this exuberant picturebook.