Hey everyone! We are super excited to announce a tour we're hosting for a YA Fantasy book CINDERELLA'S INFERNO by F.M. Boughan which released on May 29, 2018! Everyone who signs up for this tour will be entered to win a $10 Amazon GC!

The tour will run for two weeks - from June 11th-15th & 18th-22nd will have two stops per day and will consist of a mix of reviews, interviews, guest posts, spotlights, and excerpts.

Review copies (eGalleys only) will be provided by the author. Book 1 is also available if you haven't read it.

We are totally stoked for the tour for CINDERELLA'S INFERNO this June! We can't wait for everyone to read it! 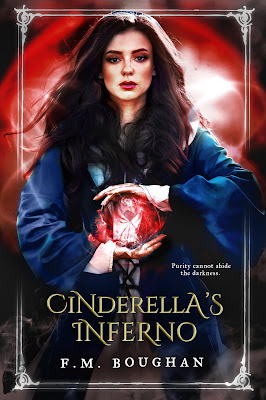 It’s been two years since Ellison defeated her stepsisters and sent her evil stepmother back into the Abyss.

Though she’s learning to control her dark magic and has spent time traveling with Prince William and bringing peace to the kingdom, one fact remains. She is a necromancer and he is a paladin of light. And so, the king refuses to give his blessing for them to marry.

Ellison resolves to descend into hell to save her mother’s soul and bring her physical body back to the world of the living. William hopes this good deed will bring Ellison into favor and finally allow them to be wed.

But the journey through hell is fraught with peril. Temptations abound and the demons Ellison sent back to the Abyss are thirsty for revenge.

Evil cannot be defeated without sacrifice—but when that sacrifice means choosing between the ones Ellison loves and her very own life, how far is she willing to go to make her family whole again?