Hey everyone! We are super excited to announce the schedule for the NECK & NECK Blog Tour which begins on Monday, June 4th!

The tour runs from June 4th-8th & 11th-15th, will have one stop per day, and will consist of reviews, guest posts, interviews, & excerpts! 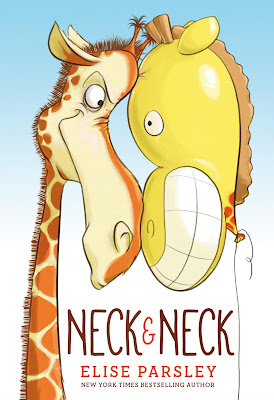 In the first stand-alone picture book from the creator of the bestselling Magnolia Says DON'T! books, a giraffe's self-esteem is tested during a hilarious confrontation between unlikely look-alikes!

Everybody loves Leopold the giraffe. He inspires awe and wonder. His adoring fans gaze and cheer. Best of all, they feed him lots of deeeelicious snacks! But, one day, a shiny, bobble-headed new rival comes in and ruins everything...a giraffe-shaped balloon! Just how far will Leopold go to prove that he's the hero of the zoo? Readers learn that actions speak far louder than looks in this laugh-out-loud face-off from Elise Parsley--the New York Times bestselling creator of If You Ever Want to Bring an Alligator to School, Don't!