Hey everyone! We are super excited to announce the schedule for the IGNITED Blog Tour which begins on Monday, March 19th!

The tour runs from March 19th-23rd & 26th-30th, will have one or two stops per day, and will consist of reviews, interviews, guest posts, & excerpts!

There is also a tour-wide giveaway sponsored by the author. So be sure to stop by any or all of the stops for a chance to win. 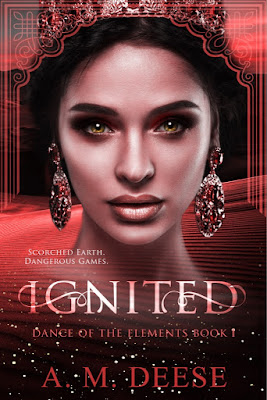 
Juggling death is nothing new for seventeen-year-old Jura, daughter of the First of the Thirteen, successive rulers of the Republic of the Sand Sea. However, when a blood chain ensnares her father, she is thrust into the seat of power and forced to rule her elders.

Jura must track down her father’s assassin and balance a country on the verge of collapse. To find the Prince of Shadows and uncover the truth, Jura puts her trust in Tylak, a former slave accused of stealing from the Everflame—a man she once condemned to death.

In a world where water is currency and enemies lurk around every corner, Jura will use her wits or risk igniting a world war.