Hey everyone! We are super excited to announce the schedule for the OFFICIAL FUTURE SHOCK Blog Tour which begins on March 21st!

There is also a tour-wide giveaway for 2 finished copies of the book, US Only! So be sure to stop by any or all of the stops for a chance to win. 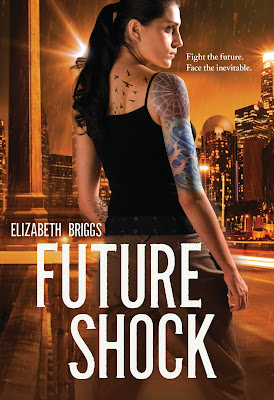 Elena Martinez has hidden her eidetic memory all her life--or so she thinks. When powerful tech giant Aether Corporation selects her for a top-secret project, she can't say no. All she has to do is participate in a trip to the future to bring back data, and she'll be set for life.

Elena joins a team of four other teens with special skills, including Adam, a science prodigy with his own reason for being there. But when the time travelers arrive in the future, something goes wrong and they break the only rule they were given: do not look into their own fates.

Now they have twenty-four hours to get back to the present and find a way to stop a seemingly inevitable future from unfolding. With time running out and deadly secrets uncovered, Elena must use her eidetic memory, street smarts, and a growing trust in Adam to save her new friends and herself.