Hey everyone! We are super excited to announce the schedule for the OFFICIAL DIG TOO DEEP Blog Tour which begins on March 21st!

There is also a tour-wide giveaway for 2 signed ARC's and swag! So be sure to stop by any or all of the stops for a chance to win. 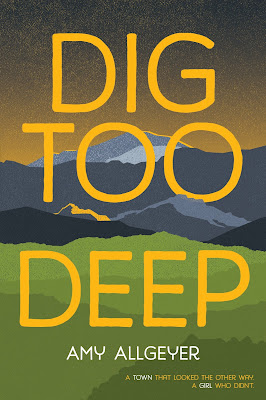 With her mother facing prison time for a violent political protest, seventeen-year-old Liberty Briscoe has no choice but to leave her Washington, DC, apartment and take a bus to Ebbottsville, Kentucky, to live with her granny. There she can at least finish high school and put some distance between herself and her mother--or her former mother, as she calls her. But Ebbottsville isn't the same as Liberty remembers, and it's not just because the top of Tanner's Peak has been blown away to mine for coal. Half the county is out of work, an awful lot of people in town seem to be sick, and the tap water is bright orange--the same water that officials claim is safe. And when Granny's lingering cold turns out to be something much worse, Liberty wonders if somebody at the mine is hiding the truth about the water. She starts to investigate and is soon plunged into a world of secrets, lies, threats, and danger. Her searches for answers and justice lead to even tougher questions--should she turn to violence and end up like her mother? Give up her quest for the sake of keeping the peace? Or keep fighting until the mine is shut down for good?