Hey everyone! We are super excited to announce the schedule for the OFFICIAL BURNING GLASS Blog Tour which begins on February 22nd!

There is also a tour-wide giveaway for 10 finished copies of the book, US Only! So be sure to stop by any or all of the stops for a chance to win. 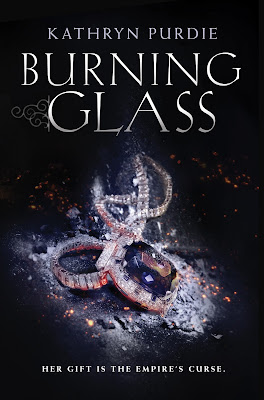 Sonya was born with the rare gift to feel what those around her feel—both physically and emotionally—a gift she’s kept hidden from the empire for seventeen long years. After a reckless mistake wipes out all the other girls with similar abilities, Sonya is hauled off to the palace and forced to serve the emperor as his sovereign Auraseer.

Tasked with sensing the intentions of would-be assassins, Sonya is under constant pressure to protect the emperor. One mistake, one small failure, will cost her own life and the lives of the few people left in the world who still trust her.

But Sonya’s power is untamed and reckless, her feelings easily usurped, and she sometimes can’t decipher when other people’s impulses end and her own begin. In a palace full of warring emotions and looming darkness, Sonya fears that the biggest danger to the empire may be herself.

As she struggles to wrangle her abilities, Sonya seeks refuge in her tenuous alliances with the volatile Emperor Valko and his idealistic younger brother, Anton, the crown prince. But when threats of revolution pit the two brothers against each other, Sonya must choose which brother to trust—and which to betray.