Hey everyone! We are super excited to announce the hosts and schedule for Alexandra Duncan's SALVAGE Blog Tour.

The tour runs for two weeks, from March 24th-28th and March 31st- April 4th, and consists of reviews, interviews and guest posts.

There will also be a tour-wide giveaway for 10 finished copies of SALVAGE so be sure to stop by for your chance to win!

We can't wait for SALVAGE to release on April 1st and for the tour to begin on the 24th. 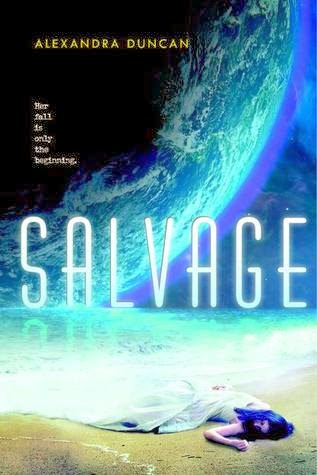 Salvage is a thrilling, surprising, and thought-provoking debut novel that will appeal to fans of Across the Universe, by Beth Revis, and The Handmaid's Tale, by Margaret Atwood. This is literary science fiction with a feminist twist, and it explores themes of choice, agency, rebellion, and family. Ava, a teenage girl living aboard the male-dominated, conservative deep space merchant ship Parastrata, faces betrayal, banishment, and death. Taking her fate into her own hands, she flees to the Gyre, a floating continent of garbage and scrap in the Pacific Ocean. This is a sweeping and harrowing novel about a girl who can't read or write or even withstand the forces of gravity. What choices will she make? How will she build a future on an earth ravaged by climate change? Named by the American Booksellers Association as a Spring 2014 Indies Introduce Pick.