Blog Tour- ON THE WAY TO BIRDLAND by @frankmoewriter With An Excerpt & #Giveaway! @fowbooks @RockstarBkTours

I am thrilled to be hosting a spot on the ON THE WAY TO BIRDLAND by Frank Morelli Blog Tour hosted by Rockstar Book Tours. Check out my post and make sure to enter the giveaway! 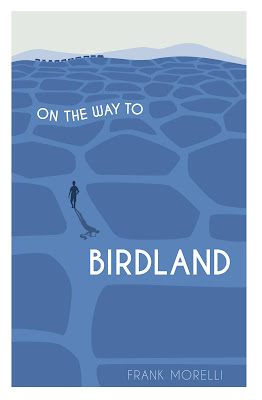 Title: ON THE WAY TO BIRDLAND

Publisher: Fish Out of Water Books

Self-proclaimed teenage philosopher Cordell Wheaton lives in a sleepy, southern town where nothing ever happens; not since his hero, jazz musician John Coltrane, left some seventy years earlier to “follow the sound.” Cordy’s life has been unraveling since the night his father and his brother, Travis, exploded on each other. The night Travis’s addiction transformed him from budding musician into something entirely different. The night Travis took his saxophone and disappeared. When Cordy’s father falls ill, the sixteen-year-old vows to reunite the Wheaton family. He embarks on a modern-day odyssey with forty bucks in his pocket and a dream to find his brother and convince him to be Travis again—by taking him to a show at Birdland Jazz Club in New York City, and reminding him of the common bonds they share with their legendary hero. Cordy’s journey is soon haunted by ghostly visions, traumatic dreams, and disembodied voices that echo through his mind. He starts to wonder if the voices are those of the fates, guiding him toward his destiny—or if he’s losing his grip on reality.

Praise for ON THE WAY TO BIRDLAND:
“Engrossing story and sympathetic characters. Morelli…makes it worth the trip.”—Booklist

“With a haunting secret, a brave journey and fascinating characters, On the Way to Birdland will remind readers that when you take a giant step into the unfamiliar, you might just find yourself.” —Joelle Charbonneau, New York Times Best Selling author of VERIFY and DISCLOSE

“On the Way to Birdland is a work of tremendous heart.  It sings with the joys and pains of family, hope, and impossible dreams.  A must read for everyone trying to find their way back to what matters most.”—Adrienne Kisner, Author of DEAR RACHEL MADDOW, THE CONFUSION OF LAUREL GRAHAM, and SIX ANGRY GIRLS

“Listening to and believing in our fears keeps away from a life we wish for. On the Way to Birdland shows us what’s possible when we listen to something else.”—Angelo Surmelis, author of THE DANGEROUS ART OF BLENDING IN

“With balance, beats, and rhythm, this heartfelt coming-of-age story is bridged together like a Coltrane riff under Frank Morelli’s skillful hand. ON THE WAY TO BIRDLAND and its cast of diverse, fully fleshed-out characters are now included among My Favorite Things.” –Brenda Rufener, Author of SINCE WE LAST SPOKE and WHERE I LIVE

“A classic tale of choice and chance, with more twists than a Virginia mountain road, On the Way to Birdland is a guide to finding your true self by accepting that you are ‘completely destructible…desperate not to get destroyed.'” —Valerie Nieman, author of TO THE BONES and BACKWATER (Fitzroy, 2022)

I grip the ragged laces of a baseball that’s been sitting on the desk  so long it has its own dust imprint. I remember tossing it for the first  time with Travis and his friends at the wide-open lot on the corner of Brookside Drive. Not too far from John Coltrane’s old house. Some don’t  know, but John Coltrane grew up right here in High Point. Travis and  I used to think it was the most exciting piece of news we’d ever heard.  I still do. When Dad delivered this news to Travis one morning at the  breakfast table, my brother saw it as an omen. He saw it as a miracle. He  saw it as God speaking directly to him. That he could take his musical  talents, because my brother was a musician—and I hope he still is—to  the top, even if the starting point was High Point, North Carolina. If John  Coltrane from Underhill Street could do it, why couldn’t Travis Wheaton?

Some folks around here say Coltrane was the greatest saxophonist  who ever lived. Travis said he was more than that. He liked to use one  specific word to describe his hero, and he’d use it all the time. To Travis,  the words “John” and “Coltrane” were synonymous with the word  “visionary.” To Travis, they were one and the same. This was how Travis  turned me onto another of my great passions in life—Greek philosophy.  I doubt he’d ever remember it, because it’s not like learning philosophical  teachings were Travis’s thing. But he told me something once, about  Coltrane and his vision. About how the ancient philosopher, Plato,  believed the rhythm of music should follow the rhythms of a life that  is orderly and brave. Travis believed Coltrane was living out the purest  form of humanity in his music and that he’d dug deep down into the past  to find it and blow it out in sweet notes from the mouth of his sax.

Travis believed that was what it meant to be a visionary, and that  always stuck with me. It made me hungry for more, so I became obsessed  with Greek philosophers, because I figured they had a better chance of  explaining Travis and Coltrane to me than anyone else. After all, it was  Plato who also said a musician is someone who is “temporarily engaged  in works of peace.” I like that. It’s how I like to see my brother, Travis. Not  like the way my father sees him. As a failure. 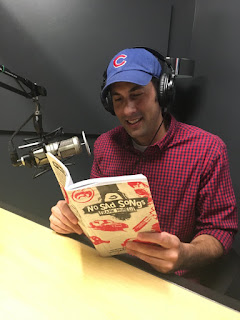 Frank Morelli is the author of the young adult novel, No Sad Songs (2018), a YALSA Quick Picks for Reluctant Readers nominee and winner of an American Fiction Award for best coming of age story. The first book in his debut middle grade series, Please Return To: Norbert M. Finkelstein (2019) is a Book Excellence Award finalist and provides young readers with a roadmap to end bullying. His fiction and essays have been featured in various publications including The Saturday Evening Post, Cobalt Review, Philadelphia Stories, and Highlights Magazine.

A Philadelphia native, Morelli now resides in High Point, NC with a brilliant illustrator and his fur babies. Connect with him on Twitter @frankmoewriter and on Instagram @frankmorelliauthor.

3 winners will receive a finished copy of ON THE WAY TO BIRDLAND, US Only.