Hey everyone! We are super excited to announce a Blog Tour we're hosting for a Fantasy/Paranormal Romance book, LYCAN'S BLOOD QUEEN by Catherine Edward which released on August 22, 2019!

The tour will run for two weeks - from September 2nd-6th & 9th-13th will have one or two stops per day and will consist of a mix of reviews, excerpts, & spotlights.


Review copies (eGalley's only) will be provided by the publisher.

We are totally stoked for the tour for  LYCAN'S BLOOD QUEEN this September! We can't wait for everyone to read it! 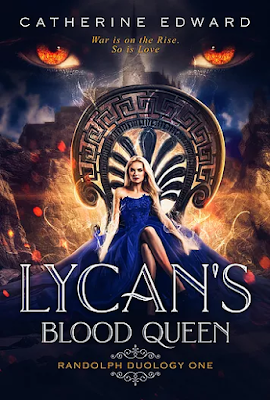 Aaron George Randolph, ruling King of the Lycans, is hell-bent on revenge for his mother’s brutal death at the hands of Vampires. But when a suspicious student takes up resident on his turf, he can’t help but be drawn to her despite knowing what she is.

Taken into custody by the ruling family of Brookedge, Mia’s life is complicated by the whole different world of mythical creatures living among humans. Now she must survive the impending civil war between old rivals, all the while learning about her true self and the power she holds. Torn between the nature of who she is and the overwhelming desire for the Lycan king, her choices are minimal.

What begins as vicious hostility changes into defying desire as Aaron and Mia are brought together by an unforgiving grudge that miraculously blooms into something unexpected that neither knew they needed.

With the war on the rise and a powerful enemy at the head of it, will their feelings for each other heal them in time? Or will they be forced to part ways and deny each other what was fated to be?