Hey everyone! We are super excited to announce a tour we're hosting for a New Adult Romantic Suspense Book, SCALES by Nicole Conway! Which releases on March 5, 2019!

The tour will run for two weeks - from March 4th-8th & 11th-15th will have one stop per day and will consist of a mix of reviews, excerpts, & spotlights.

Review copies (EGalley's only) will be provided by the publisher.

We are totally stoked for the tour for the SCALES this March! We can't wait for everyone to read it! 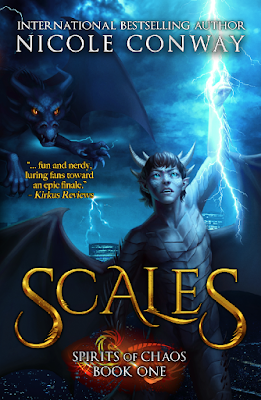 When New York City faces the threat of an ancient evil, a teenage boy must use a magical bracelet to transform into a monster-slaying dragon superhero.

Koji Owens is the new kid … again. As the only son of an Air Force F-16 pilot, he’s learned to adapt and survive every time they move. It’s not easy starting over with new friends and schools every two years, but when the Owens family makes their final move to New York, Koji finally has hope for a normal high school life—that is, until he finds a strange bracelet in his locker.

Transformed into a storm-summoning dragon warrior, Koji finds himself caught up in a world of ancient powers, secret identities, and colossal monsters threatening to destroy his new home. But these awesome powers come with strings attached, and revealing his true identity could mean losing everything he loves. With his family and friends now in mortal danger and New York City in flames, Koji must find the courage to become the hero they need and face down an enemy hiding in plain sight.

A comic-obsessed teenage misfit embraces his inner hero in this action-packed adventure that will leave you ready to get your scales on!