Hey everyone! We are super excited to announce a Release Day Blitz that we're hosting for a an amazing Reverse Harem Adult Fantasy the A COURT OF EARTH AND AETHER  by Meg Xuemei X which releases on February 12, 2019!

The blitz is scheduled for the week of, February 12th and can go up at Midnight Eastern or any time after that on release day, and we'd love to have you take part!

If you'd love to participate but won't be able to get your post up by Midnight Eastern on Thursday the 14th, posting later that day or the following day will be absolutely fine!

We will send everything you need for your posts by, February 11th. But if you do sign up after the 11th we'll send you the details out on the 12th. 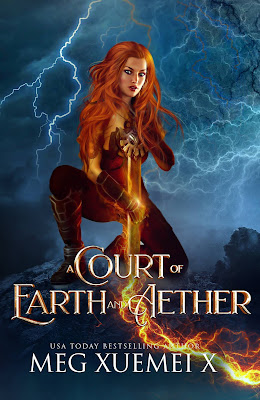 Title: A COURT OF EARTH AND AETHER (War of the Gods #4)


Cass Saélihn is the weapon, the hybrid born to kill the Olympian gods.

Only the price is her own life.

One dies so millions can live. So her mates will live.

But Cass can't just abandon them, can she? She's just found them--a home she'd never imagined she could have. So when Death offers her a way out if she plays one of his sick games, she can't refuse. If she plays it right, she might just rise from ash and ember.

And her loyal warrior-mates will be with her in life, or death. Even when she has to become the Darkness that devours the worlds. Even when she's lost to herself.

She's not lost to them.

So, she'll play the final deadly game, and when Cass unleashes her true, powerful self, the immortal gods will burn in her flames.