Hey everyone! We are super excited to announce the schedule for the SHATTER THE SUNS by Caitlin Sangster Blog Tour which begins on Monday, December 3rd!

The tour runs from December 3rd-7th & 10th-14th, will have one or two stops per day, and will consist of reviews, excerpts, interviews, & spotlights! 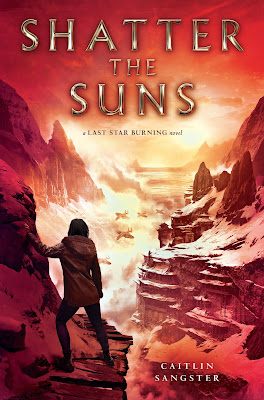 No one is safe, not with a horrifying new strain of Sleeping Sickness tearing through the population. After fleeing the City with her friends, Sev has one goal: to find the cure her mother developed and put an end to the epidemic once and for all. But decoding her mother’s last words—to seek out “Port North”—is easier said than done.

Nobody she talks to has heard of Port North, and with only Tai-ge and June on her side, Sev fears Dr. Yang will find the cure first, and that he’ll use it to start a new world order under his rule.

With no leads, Sev is running out of options—until she discovers someone hiding in the cargo hold of her heli plane. Someone she thought was dead. Someone with maps that could point the way to Port North, if only she could read them.