Hey everyone! We are super excited to announce the schedule for the LOVE A LA MODE by Stephanie Kate Strohm Blog Tour which begins on Monday, November 26th!

The tour runs from November 26th-December 21st, will have one stop per day, and will consist of reviews, excerpts, & spotlights! 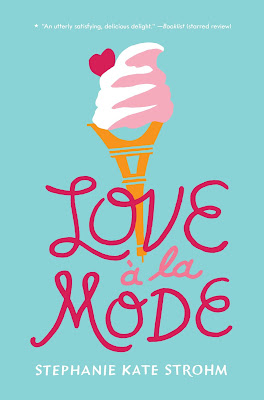 Take two American teen chefs, add one heaping cup of Paris, toss in a pinch of romance, and stir. ...

Rosie Radeke firmly believes that happiness can be found at the bottom of a mixing bowl. But she never expected that she, a random nobody from East Liberty, Ohio, would be accepted to celebrity chef Denis Laurent's school in Paris, the most prestigious cooking program for teens in the entire world. Life in Paris, however, isn't all cream puffs and crepes. Faced with a challenging curriculum and a nightmare professor, Rosie begins to doubt her dishes.

Henry Yi grew up in his dad's restaurant in Chicago, and his lifelong love affair with food landed him a coveted spot in Chef Laurent's school. He quickly connects with Rosie, but academic pressure from home and his jealousy over Rosie's growing friendship with gorgeous bad-boy baker Bodie Tal makes Henry lash out and push his dream girl away.

Desperate to prove themselves, Rosie and Henry cook like never before while sparks fly between them. But as they reach their breaking points, they wonder whether they have what it takes to become real chefs.

Perfect for lovers of Chopped Teen Tournament and Kids Baking Championship, as well as anyone who dreams of a romantic trip to France, Love la Mode follows Rosie and Henry as they fall in love with food, with Paris, and ultimately, with each other.