Tour Schedule: THE CAMELOT CODE: THE ONCE AND FUTURE GEEK BY Mari Mancusi

Hey everyone! We are super excited to announce the schedule for the THE CAMELOT CODE: THE ONCE AND FUTURE GEEK BY Mari Mancusi Blog Tour which begins on Monday, November 12th!

The tour runs from November 12th-16th & 19th-23rd, will have one stop per day, and will consist of reviews, interviews, excerpts, & spotlights! 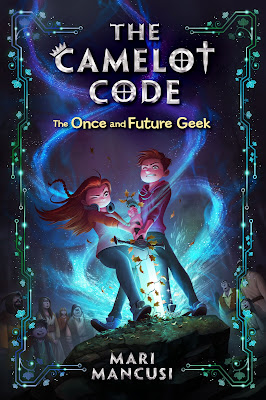 Young King Arthur accidentally time travels to the 21st century and googles himself, discovering the not-so-happily ever after in store for him once he pulls the sword from the stone. He decides he'd much rather stay here--and join the football team instead.

Now modern day gamer geeks Sophie and Stu, with the help of Merlin, find themselves in a race against time to pull a Camelot-size caper--get that sword pulled from the stone and the stubborn once and future king back to the past where he belongs. While Arthur takes on the role of wide-receiver in an attempt to save the football team from a losing season, Sophie and Stu sword-fight, joust, and horseback ride their way through Camelot as they fight to save the timeline. If they fail, the world as they know it (not to mention the existence of pepperoni pizza!) will cease to exist forever.