Hey everyone! We are super excited to announce a tour we're hosting for a Sci-Fi Romance book, CAPTIVE DESIRE by Robin Lovett which releases on November 19, 2018!  This is a companion novel series so you do not have to read the first book.

The tour will run for one week - from November 19th-23rd will have one or two stops per day and will consist of a mix of reviews, excerpts, & spotlights.

Review copies (eGalley's Only)  will be provided by the publisher via a Netgalley Widget.

We are totally stoked for the tour for CAPTIVE DESIRE this November! We can't wait for everyone to read it! 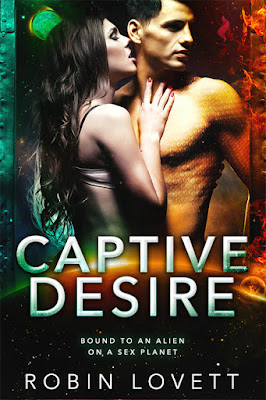 Gahnin, a Ssedez general, hasn't had a woman since his first mate died a century ago. And since his kind can live for a thousand years, he's still bound by traditional mourning. If he breaks mourning, he could lose his position in the Ssedez military. His friends and family. Everything.

That means no falling in love. No lust. No sex. For another century.

Then he's ordered to guard Assura, a human woman and military special operative, on a planet whose atmosphere causes a sexual arousal so fierce, it drives people insane if it isn't satisfied.

Even though he tries to keep Assura at arm's length, he's hooked. Forbidden desire called to life by a human, the same species who killed his first mate. Assura needs his body if she is going to live. But if he gives in to his passion, it could destroy him.