Hey everyone! We are super excited to announce the schedule for the NYXIA UNLEASHED Blog Tour which begins on Monday, June 25th!

The tour runs from July 2nd- 31st weekdays only, will have one stop per day, and will consist of reviews! 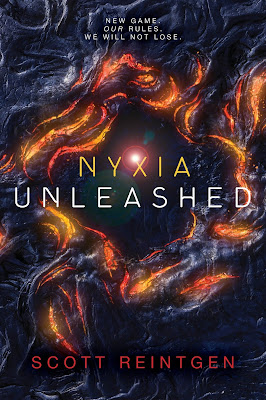 Getting to Eden brought Emmett and his crewmates one step closer to their promised fortune. But surviving Eden may be the biggest reward of all. Discover book two in the trilogy Marie Lu called, “a high-octane thriller.”

Emmett Atwater thought Babel’s game sounded easy. Get points. Get paid. Go home. But it didn’t take long for him to learn that Babel’s competition was full of broken promises, none darker or more damaging than the last one.

Now Emmett and the rest of the Genesis survivors must rally and forge their own path through a new world. Their mission from Babel is simple: extract nyxia, the most valuable material in the universe, and play nice with the indigenous Adamite population.

But Emmett and the others quickly realize they are caught between two powerful forces—Babel and the Adamites—with clashing desires. Will the Genesis team make it out alive before it’s too late?