Hey everyone! We are super excited to announce the schedule for the THOMAS PAINE AND THE DANGEROUS WORD Blog Tour which begins on Monday, May 28th!

The tour runs from May 28th-June 1st & June 4th-8th, will have one stop per day, and will consist of reviews, guest posts, interviews, & excerpts! 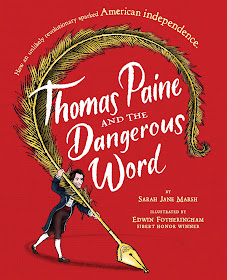 As an English corset-maker's son, Thomas Paine was expected to spend his life sewing women's underwear. But as a teenager, Thomas dared to change his destiny, enduring years of struggle until a meeting with Benjamin Franklin brought Thomas to America in 1774-and into the American Revolution.

Within fourteen months, Thomas would unleash the persuasive power of the written word in Common Sense-a brash wake-up call that rallied the American people to declare independence against the mightiest empire in the world.

This fascinating and extensively researched biography, based on numerous primary sources, will immerse readers in Thomas Paine's inspiring journey of courage, failure, and resilience that led a penniless immigrant to change the world with his words.