Hey everyone! We are super excited to announce the schedule for the THE HARPER EFFECT Blog Tour which begins on Monday, May 7th!

There is also a tour-wide giveaway for a finished copy of THE HARPER EFFECT & a tote bag, US Only. So be sure to stop by any or all of the stops for a chance to win. 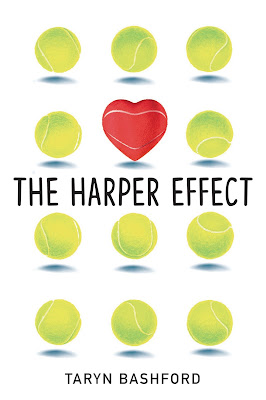 Sixteen-year-old Harper was once a rising star on the tennis court--until her coach dropped her for being "mentally weak." Without tennis, who is she? Her confidence at an all-time low, she secretly turns to her childhood friend, next-door neighbor Jacob--who also happens to be her sister's very recent ex-boyfriend. If her sister finds out, it will mean a family war.

But when Harper is taken on by a new coach who wants her to train with Colt, a cold, defensive, brooding young tennis phenom, she hits the court all the harder, if only to prove Colt wrong. But as the two learn to become a team, Harper gets glimpses of the vulnerable boy beneath the surface, the boy who was deeply scarred by his family's dark and scandalous past. The boy she could easily find herself falling for.

As she walks a fine line between Colt's secrets, her forbidden love, and a game that demands nothing but the best, Harper must decide between her past and her future and between two boys who send her head spinning. Is the cost of winning the game worth losing everything?

A sizzling tennis romance perfect for the summer months, The Harper Effect, will be a grand slam for fans of Kasie West, Miranda Kinneally and Simone Ekeles.