Hey everyone! We are super excited to announce the schedule for the SUMMER CONSTELLATIONS Blog Tour which begins on Monday, April 23rd!

There is also a tour-wide giveaway for 3 finished copies of SUMMER CONSTELLATIONS, US Only. So be sure to stop by any or all of the stops for a chance to win. 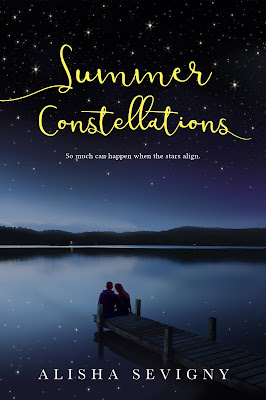 Julia Ducharme is ready for a fresh start. Her little brother has finally recovered from a serious illness, and now she just wants to enjoy peak season at the campground her family owns. Maybe this will be the year her annual summer fling with Dan Schaeffer becomes something more?

But her summer dreams are quickly shattered. First, Dan arrives for vacation with a new girlfriend in tow, and then Julia discovers this may be her last summer in the only home she's ever known.

Crushing medical bills have brought her single mom to the brink of bankruptcy, and a wealthy developer is sniffing around the campground. He sees what Julia sees: lush woods, a pristine lake, miles of trails for adventure. Unlike Julia, he thinks this is the perfect spot for a casino resort.

Heartbroken and afraid, Julia looks to the stars for some perspective. Taking her telescope down to the dock one night, she has a chance encounter with a guitar-playing boy who offers some helpful advice. Too bad this handsome stranger is the developer's son, Nick Constantine.

As plans for a resort move forward, Julia is desperate to find a solution that doesn't mean leaving the lake. Nick, in turn, is desperate to separate himself from his father's aggressive business tactics. He promises that, together, they can thwart the sale.

But can Julia trust him to conspire against his own father? And could she ever she trust him with her heart?

SUMMER CONSTELLATIONS is a story of lost summers, hidden treasure and love written in the stars. It is also a thoughtful reflection on what it means to love --- and leave --- one's childhood home.