Tour Schedule: NOCTURNAL MEETINGS OF THE MISPLACED by R.J. Garcia

Hey everyone! We are super excited to announce the schedule for the NOCTURNAL MEETINGS OF THE MISPLACED Blog Tour which begins on Monday, April 23rd!

There is also a tour-wide giveaway for a finished copy of NOCTURNAL MEETINGS OF THE MISPLACED, US Only. So be sure to stop by any or all of the stops for a chance to win. 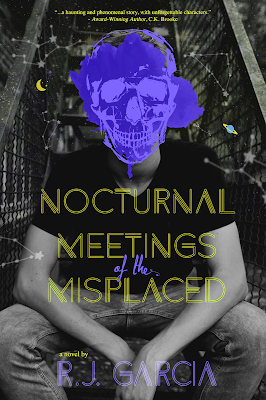 Mystery surrounds the town of Summertime, Indiana, where fifteen-year-old Tommy Walker and his little sister are sent to live with relatives they’ve never met. Tommy soon makes friends with Finn Wilds, a rebellious local who lives with his volatile and abusive stepfather, who also happens to be the town’s sheriff.

Finn invites Tommy to late night meetings in the woods, where Tommy gets to know two girls. He forms a special and unique connection with both girls. The meetings become a place where the kids, who don’t fit in at school, or home can finally belong. As the group of friends begin to unravel clues to a cold case murder and kidnapping— they learn the truth is darker and closer than they ever imagined. Even if they live to tell, will anyone believe them?