Hey everyone! We are super excited to announce the schedule for the FANGS & FINS Blog Tour which begins on Monday, April 30th!

There is also a tour-wide giveaway for a $10 Amazon Gift Card, International. So be sure to stop by any or all of the stops for a chance to win. 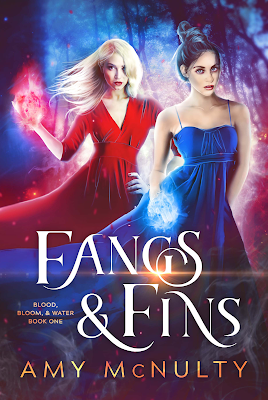 A dapper vampire. A sullen merman. Two heirs to a great conflict—and each needs to claim a beloved to become his kindred’s champion.

High school senior Ember Goodwin never had a sister, but after her mom’s remarriage, she now has two. The eldest is no stranger to her—Ivy is a witty girl in her grade who’s almost never spoken to the shy bookworm before—but she’s surprised to find the popular girl quite amiable. Their burgeoning friendship is tested, however, when Dean Horne, a pale, besuited charmer, shows interest in them both and plans to reveal his appetite for blood to the one who’ll stand by his side.

Seventeen-year-old Ivy Sheppard is tired of splitting her time between her dad’s and her mom’s, particularly when her dad uproots their lives to move them in with his new wife and step-daughter. Used to rolling with her parents’ whims, she tries to make the best of it and befriend her nerdy new step-sister. Her hectic life grows more unwieldy when she catches the eye of junior Calder Poole, whom she swears she sees swap well-toned legs for a pair of fins during a dip in a lake. Now she’s fending off suitors left and right, all while trying to get to the bottom of the strange happenings in her town.

The first book in the Blood, Bloom, & Water series sets family against family and friend against friend as an epic, ancient war comes to a head in a supposedly sleepy suburb.