Hey everyone! We are super excited to announce the schedule for the BRIGHTLY BURNING Blog Tour which begins on Monday, April 30th!

There is also a tour-wide giveaway for 3 finished copies of BRIGHTLY BURNING, US Only. So be sure to stop by any or all of the stops for a chance to win. 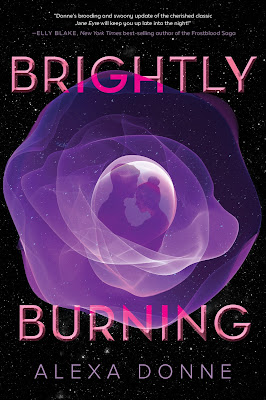 Seventeen-year-old Stella Ainsley wants just one thing: to go somewhere—anywhere—else. Her home is a floundering spaceship that offers few prospects, having been orbiting an ice-encased Earth for two hundred years. When a private ship hires her as a governess, Stella jumps at the chance. The captain of the Rochester, nineteen-year-old Hugo Fairfax, is notorious throughout the fleet for being a moody recluse and a drunk. But with Stella he’s kind.

But the Rochester harbors secrets: Stella is certain someone is trying to kill Hugo, and the more she discovers, the more questions she has about his role in a conspiracy threatening the fleet.