Hey everyone! We are super excited to announce the schedule for the SLEIGHT Blog Tour which begins on Monday, April 2nd!

The tour runs from April 2nd-30th weekdays only, will have one stop per day, and will consist of reviews & excerpts!

There is also a tour-wide giveaway for 3 finished copies of the book & swag, International. So be sure to stop by any or all of the stops for a chance to win. 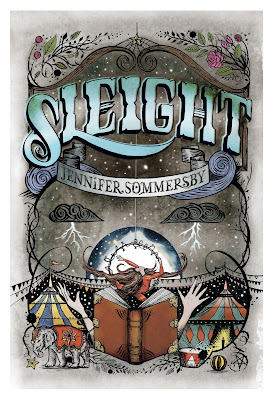 Delia smiles at the shadow only she sees—

Something slams into her. The lyra whirls like a half-dollar spinning on its edge.

My mother is thrown backward.

Growing up in the Cinzio Traveling Players Company, Genevieve Flannery is accustomed to a life most teenagers could never imagine: daily workouts of extravagant acrobatics; an extended family of clowns; wild animals for pets; and her mother, Delia, whose mind has always been tortured by visions—but whose love Geni never questions. In a world of performers who astonish and amaze on a daily basis, Delia’s ghostly hallucinations never seemed all that strange . . . until the evening Geni and her mother are performing an aerial routine they’ve done hundreds of times, and Delia falls to her death.

That night, a dark curtain in Geni’s life opens. Everything has changed.

Still reeling from the tragedy, the Cinzio Traveling Players are also adjusting to the circus’s new owner: a generous, mysterious man whose connection to the circus—Geni suspects—has a dark and dangerous history. And suddenly Geni is stumbling into a new reality of her own, her life interrupted daily by the terrors only Delia used to be able to see.

As the visions around her grow stronger, Geni isn’t sure who she can trust. Even worse, she’s starting to question whether she can trust her own mind.