Hey everyone! We are super excited to announce the schedule for the LOST CROW CONSPIRACY Blog Tour which begins on Monday, March 5th!

The tour runs from March 5th-9th & March 12th-16th, will have one stop per day, and will consist of reviews, interviews, guest posts, & excerpts!

There is also a tour-wide giveaway for 3 finished copies of the book & a magnet, US Only. So be sure to stop by any or all of the stops for a chance to win. 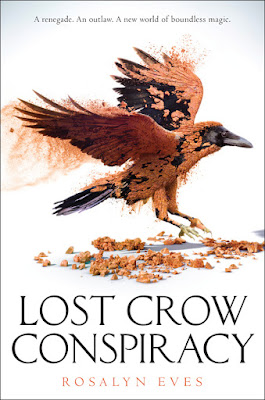 Sixteen-year old Anna Arden was once just the magically barren girl from an elite Luminate family. Now she has broken the Binding—and Praetheria, the creatures held captive by the spell, wreak havoc across Europe. Lower-class citizens have access to magic for the first time, while other Luminates lose theirs forever. Austria and Hungary are at odds once more.

Anna Arden did not know breaking the Binding would break the world.

Anna thought the Praetheria were on her side, content and grateful to be free from the Binding. She thought her cousin Matyas's blood sacrifice to the disarm the spell would bring peace, equality, justice. She thought her future looked like a society that would let her love a Romani boy, Gabor.

But with the Monarchy breathing down her neck and the Praetheria intimidating her at every turn, it seems the conspiracies have only just begun.

As threat of war sweeps the region, Anna quickly discovers she can't solve everything on her own. Now there's only one other person who might be able to save the country before war breaks out. The one person Anna was sure she'd never see again. A bandit. A fellow outlaw. A man known as the King of Crows. Matyas.