Tour Schedule: P.S. I MISS YOU by Jen Petro-Roy

Hey everyone! We are super excited to announce the schedule for the P.S. I MISS YOU Blog Tour which begins on Monday, February 26th!

The tour runs from February 26th-March 2nd & March 5th-9th, will have one stop per day, and will consist of reviews, interviews, guest posts, & excerpts! 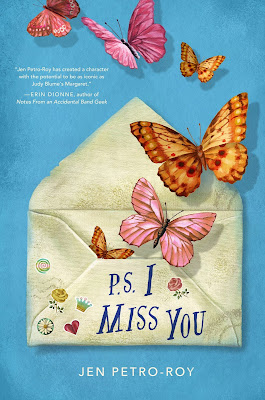 In this epistolary middle-grade debut novel, a girl who's questioning her sexual orientation writes letters to her sister, who was sent away from their strict Catholic home after becoming pregnant.

Eleven-year-old Evie is heartbroken when her strict Catholic parents send her pregnant sister away to stay with a distant great-aunt. All Evie wants is for her older sister to come back. But when her parents forbid her to even speak to Cilla, she starts sending letters. Evie writes letters about her family, torn apart and hurting. She writes about her life, empty without Cilla. And she writes about the new girl in school, June, who becomes her friend, and then maybe more than a friend.

As she becomes better friends with June, Evie begins to question her sexual orientation. She can only imagine what might happen if her parents found out who she really is. She could really use some advice from Cilla. But Cilla isn't writing back.