Hey everyone! We are super excited to announce a tour we're hosting for EXOTIQA by M. Black which released on March 1, 2017!

The tour will run for two weeks - from March 12th-16th & 19th-23rd will have one stop per day and will consist of a mix of reviews, interviews, guest posts, and excerpts.

Review copies (eGelleys Only) will be provided by the author.

We are totally stoked for the tour for EXOTIQA this March! We can't wait for everyone to read it! 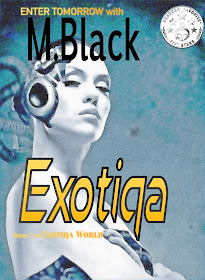 Set in the year 2055 in British Columbia, Canada, where humans are part robotic and robots are becoming more humanlike, the line dividing the two is becoming less clear.

With Fione's best friend and love interest, a Flexbot named Pix, Fione and Maci must come face-to-face with the greatest dangers their country has ever seen and learn the disturbing secrets of the popular online program Exotiqa—which her friends, family, and most of the country has downloaded onto their Cerebral Slabs. This won’t be easy, since Maci’s only love and greatest enemy, nicknamed Thirty, is tracking her every move.

Told from two points of view: Maci’s and Fione's, this dystopia is filled with plenty of futuristic technology, and tells a story of a world that could eerily mirror our own one day.

Fans of Divergent and The Hunger Games will love this dystopian world with two young but strong female heroines who must save the fragile system crumbling around them. This story will even satisfy those looking for something with more philosophical themes and it is a perfect fit for readers interested in sci-fi, artificial intelligence, and robotics.