Hey everyone! We are super excited to announce the schedule for the R.I.P. ELIZA HART Blog Tour which begins on Monday, November 20th!

The tour runs from November 20th-24th & November 27th-December 1st, will have one stop per day, and will consist of reviews, interviews, guest posts, & excerpts! 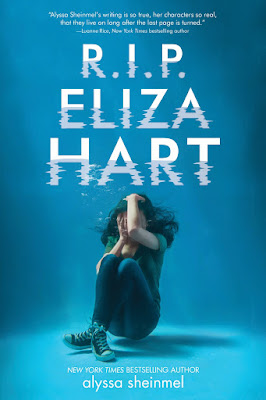 When Eliza Hart, the most popular girl at Ventana Ranch boarding school, is found dead on the cliffs outside her dormitory, Ellie Sokoloff is determined to figure out what happened to her. After all, Eliza was Ellie’s childhood best friend.

Never mind that ever since Ellie arrived at school Eliza has spread terrible rumors about her, calling her a liar and a stalker, when all Ellie wanted to do was rekindle their old friendship. Or that Ellie’s claustrophobia limits where she can go and what she can do. Or that Ellie’s suitemate, Sam, is the only one who will help her . . . because to everyone else, Ellie looks like the top suspect.

Can Ellie clear her name and solve the mystery behind Eliza’s death? Her hunt for the truth will uncover secrets she never imagined, sending her deep into her own memories of her childhood with Eliza Hart.

New York Times bestselling author Alyssa Sheinmel delivers a gripping mystery and a sensitive and moving examination of the secrets that can hold us back—and even destroy us.