Hey everyone! We are super excited to announce a Release Day Blitz  that we're hosting for Erin Summerill's EVER THE BRAVE, which releases on December 5, 2017.

The blitz is scheduled for the day of, Tuesday, December 5th and can go up at Midnight Eastern or any time after that on release day, and we'd love to have you take part!

If you'd love to participate but won't be able to get your post up by Midnight Eastern on Tuesday the 5th, posting later that day or the following day will be absolutely fine!

We will send everything you need for your posts by, December 3rd . But if you do sign up after the 3rd we'll send you the details out on the 4th.

***Sign-ups will be open until December 4th at noon PST***

We are anxiously awaiting EVER THE BRAVE's release on December 5th  and are super excited to share the news about its release. 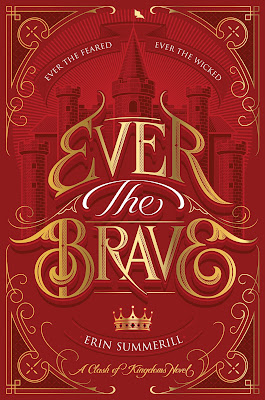 After saving King Aodren with her newfound Channeler powers, Britta only wants to live a peaceful life in her childhood home. Unfortunately, saving the King has created a tether between them she cannot sever, no matter how much she'd like to, and now he's insisting on making her a noble lady. And there are those who want to use Britta’s power for evil designs. If Britta cannot find a way to harness her new magical ability, her life—as well as her country—may be lost.

The stakes are higher than ever in the sequel to Ever the Hunted, as Britta struggles to protect her kingdom and her heart.