Hey everyone! We are super excited to announce the schedule for the THE LOST CAUSES Blog Tour which begins on Monday, September 4th!

The tour runs from September 4th-8th & 11th-15th, will have one stop per day, and will consist of reviews!

There is also a tour-wide giveaway for 3 finished copies of the book, US & Canda Only. So be sure to stop by any or all of the stops for a chance to win. 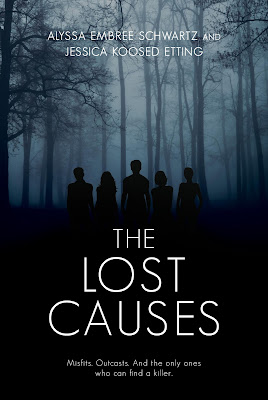 They're the kids that no one knows --- or no one wants to know. The rich depressive, the OCD chick, the hypochondriac, the drug abuser, the athlete with anger management issues. All chosen for intensive group therapy because they're out of other options. They're lost causes, the therapist tells them. She promises this support group will help them heal.

There's only one problem. She's not a therapist. And that water she offers? It contains a dangerous serum that gives each of the kids a psychic power.

Suddenly, they can think clearly, speak to ghosts, see the past, even move objects with their mind. Their earlier problems have vanished, but their new freedom comes with a price.
Sabrina, Gabby, Z, Justin and Andrew are to help the FBI solve the grisly murder that has rocked their small town. Their new powers will help them uncover clues and follow leads that have eluded the authorities. Their outsider status gives them the perfect cover.

But the same traits that make them top investigators also make them vulnerable. As they close in on the murderer, they expose a much larger conspiracy that puts them directly in harm's way and makes them wonder who --- if anyone --- they can trust.