Hey everyone! We are super excited to announce the schedule for the COCO: MIGUEL AND THE GRAND HARMONY Blog Tour which begins on Monday, October 2nd! 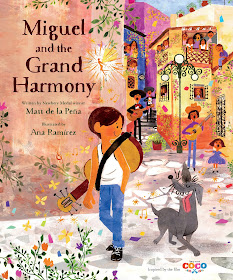 This jacketed picture book pairs Newbery Winner Matt de la Pe a and Pixar artist Ana Ram rez with the highly anticipated Pixar Studios film, Coco. Featuring a beautiful original story based on the characters of the film, as well as vibrant stylized artwork, this title is sure to appeal to readers of all ages.

Disney*Pixar's Coco is the celebration of a lifetime, where the discovery of a generations-old mystery leads to a most extraordinary and surprising family reunion.