Hey everyone! We are super excited to announce a Release Week Blitz  that we're hosting for Chantal Gadoury's ALLERLEIRAUH, which releases on August 22, 2017.

The blitz is scheduled for the week of, Tuesday, August 22nd and can go up at Midnight Eastern or any time after that on release day, and we'd love to have you take part!

If you'd love to participate but won't be able to get your post up by Midnight Eastern on Tuesday the 11th, posting later that day or the following day will be absolutely fine!

We will send everything you need for your posts by, August 20th . But if you do sign up after the 13th we'll send you the details out on the 21st.

We both are anxiously awaiting ALLERLEIRAUH's release on August 22nd  and are super excited to share the news about its release. 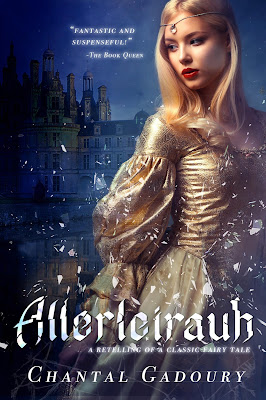 Once Upon a Time…

In the kingdom of Tranen, a king makes a promise to his dying wife that he'll only remarry a woman who possesses her golden hair. In time, the king's eyes are turned by his daughter. Realizing her father’s intentions, Princess Aurelia tries to trick him by requesting impossible gifts: dresses created by the sun, moon and stars, and a coat made of a thousand furs. But when he is successful, Aurelia sacrifices her privileged life and flees her kingdom, disguised by the cloak and a new name, Allerleirauh.

She enters the safe haven of Saarland der Licht, where the handsome and gentle Prince Klaus takes her under his care. Hoping not to be discovered by her father’s courtiers, Allerleirauh tries to remain hidden under her new identity when she finds unexpected love with Prince Klaus, even though his arranged marriage to the princess of a neighboring kingdom approaches. Risking everything, Allerleirauh must face her troubled past and her fears of the future along her journey to self-acceptance in this triumphant retelling of the classic Grimm Fairy Tale.