Hey everyone! We are super excited to announce the schedule for the ILLUMINAE Paperback Blog Tour which begins on Monday, April 24th!

The tour runs from April 4th-28th, May 1st-5th, & 8th-12th, will have one stop per day, and will consist of reviews,re-posted reviews, blogger content, or interviews!

There is also a tour-wide giveaway for 3 paperback copies of the book, US Only. So be sure to stop by any or all of the stops for a chance to win. 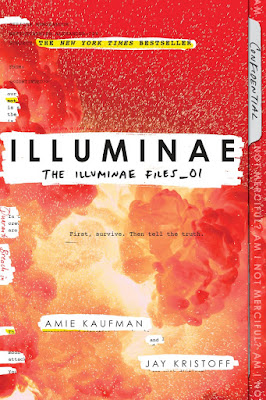 It certainly filled the Battlestar Galactica-shaped hole in my heart.- --Victoria Aveyard, bestselling author of The Red Queen

Read the New York Times bestselling blockbuster that critics are calling -out-of-this-world awesome.- The first in an epic sci-fi series unlike anything else out there.

Kady thought breaking up with Ezra was the worst thing she'd ever been through. That was before her planet was invaded. Now, with enemy fire raining down on them, Kady and Ezra are forced to fight their way onto one of the evacuating craft, with an enemy warship in hot pursuit.

But the warship could be the least of their problems. A deadly plague has broken out and is mutating, with terrifying results; the fleet's AI, which should be protecting them, may actually be their biggest threat; and nobody in charge will say what's really going on. As Kady plunges into a web of data hacking to get to the truth, it's clear only one person can help her bring it all to light: Ezra.

Told through a fascinating dossier of hacked documents--including emails, schematics, military files, IMs, medical reports, interviews, and more--Illuminae is the first book in a heart-stopping, high-octane trilogy about lives interrupted, the price of truth, and the courage of everyday heroes.

Brace yourself, because you're about to be immersed in a mindscape that you'll never want to leave.- --Marie Lu, author of the bestselling Legend series

Prepare yourselves for Illuminae.- --EW.com

You're not in for an ordinary novel experience. . . .- --Bustle.com


Don't miss the rest of the series!