Hey everyone! We are super excited to announce a tour we're hosting for GLITTER by Aprilynne Pike which is releasing on October 25th!

The tour will run for two weeks - from October 17th 21st & 24th-28th- will have one stop per day and will consist of a mix of reviews, excerpts, guest posts, and interviews.

The bloggers who are chosen as hosts for a guest post or an interview will be required to come up with interview questions (at most five) guest posts will be done by the author. Interviews will be author or character interviews.

Review copies will be sent by the publisher.

We are totally stoked for the release of GLITTER this October! We can't wait for everyone to read it! 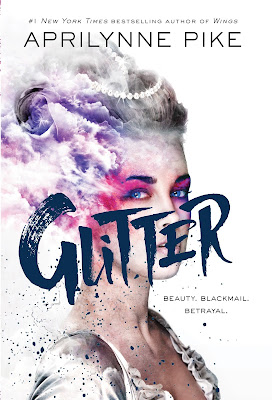 
From #1 New York Times bestselling author Aprilynne Pike comes a truly original new novel—Breaking Bad meets Marie Antoinette in a near-future world where the residents of Versailles live like it’s the eighteenth century and an almost-queen turns to drug dealing to save her own life.

Outside the palace of Versailles, it’s modern day. Inside, the people dress, eat, and act like it’s the eighteenth century—with the added bonus of technology to make court life lavish, privileged, and frivolous. The palace has every indulgence, but for one pretty young thing, it’s about to become a very beautiful prison.

When Danica witnesses an act of murder by the young king, her mother makes a cruel power play . . . blackmailing the king into making Dani his queen. When she turns eighteen, Dani will marry the most ruthless and dangerous man of the court. She has six months to escape her terrifying destiny. Six months to raise enough money to disappear into the real world beyond the palace gates.

Her ticket out? Glitter. A drug so powerful that a tiny pinch mixed into a pot of rouge or lip gloss can make the wearer hopelessly addicted. Addicted to a drug Dani can sell for more money than she ever dreamed.

But in Versailles, secrets are impossible to keep. And the most dangerous secret—falling for a drug dealer outside the palace walls—is one risk she has to take.