Hey everyone! We are super stoked to announce a tour we're hosting for DARK ENERGY by Robison Wells which is releasing on March 29th, 2016!

The tour will run for two weeks - from March 21st-24th & March 28th-April 1st- will have one stop per day and will consist of a mix of guest posts, interviews and reviews.

Review copies will be provided by Rockstar Book Tours.

We are super excited for DARK ENERGY's release this March! It sounds freaking awesome! 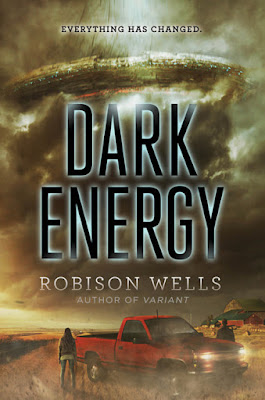 We are not alone. They are here. And there’s no going back. Perfect for fans of The Fifth Wave and the I Am Number Four series, Dark Energy is a thrilling stand-alone science fiction adventure from Robison Wells, critically acclaimed author of Variant and Blackout.

Five days ago, a massive UFO crashed in the Midwest. Since then, nothing—or no one—has come out.

If it were up to Alice, she’d be watching the fallout on the news. But her dad is director of special projects at NASA, so she’s been forced to enroll in a boarding school not far from the crash site. Alice is right in the middle of the action, but even she isn’t sure what to expect when the aliens finally emerge. Only one thing is clear: everything has changed.