Hey everyone! We are super stoked to announce a tour we're hosting for UNHOOKED by Lisa Maxwell which is releasing on February 2nd, 2016!

The tour will run for two weeks - from January 25th-29th & February 1st-5th- will have one stop per day and will consist of a mix of guest posts, interviews and reviews.

Review copies will be provided by Simon Teen.

We are super excited for UNHOOKED's release this February! It sounds amazing! 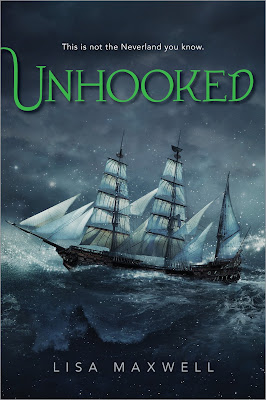 From “talented wordsmith” (Publishers Weekly) Lisa Maxwell comes a lush, atmospheric fantasy novel filled with twists and turns about a girl who is kidnapped and brought to an island inhabited by fairies, a roguish ship captain, and bloodthirsty beasts.

For as long as she can remember, Gwendolyn Allister has never had a place to call home. Her mother believes they are being hunted by brutal monsters, and those delusions have brought them to London, far from the life Gwen had finally started to build for herself. Gwen’s only saving grace is that her best friend, Olivia, is with her for the summer.

But shortly after their arrival, the girls are kidnapped by shadowy creatures and dragged to a world of flesh-eating sea hags and dangerous Fey. And Gwen begins to realize that maybe her mother isn’t so crazy after all…

Gwen discovers that this new world she inhabits is called Neverland, but it’s nothing like the Neverland you’ve heard about in stories. Here, good and evil lose their meaning and memories slip like water through your fingers. As Gwen struggles to remember where she came from and tries to find a way home, she must choose between trusting the charming fairy-tale hero who says all the right things and the captivating pirate who promises to keep her safe.

Caught in the ultimate battle between good and evil, with time running out and her enemies closing in, Gwen is forced to finally face the truths she’s been hiding from all along. But can she save Neverland without losing herself?