Hey everyone! We are super excited to announce the schedule for the SHADOWSHAPER  Blog Tour which begins on June 29th!

The tour runs from June 29th- July 3rd & July 6th-10th, and will have one stop per day and will consist of reviews, excerpts, and interviews.

There is also a tour-wide giveaway for 3 finished copies of SHADOWSHAPER courtesy of Daniel and Scholastic, US Only!So be sure to stop by any or all of the stops for a chance to win. 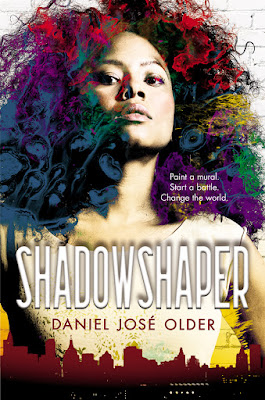 Sierra Santiago was looking forward to a fun summer of making art, hanging out with her friends, and skating around Brooklyn. But then a weird zombie guy crashes the first party of the season. Sierra's near-comatose abuelo begins to say "No importa" over and over. And when the graffiti murals in Bed-Stuy start to weep.... Well, something stranger than the usual New York mayhem is going on.

Sierra soon discovers a supernatural order called the Shadowshapers, who connect with spirits via paintings, music, and stories. Her grandfather once shared the order's secrets with an anthropologist, Dr. Jonathan Wick, who turned the Caribbean magic to his own foul ends. Now Wick wants to become the ultimate Shadowshaper by killing all the others, one by one. With the help of her friends and the hot graffiti artist Robbie, Sierra must dodge Wick's supernatural creations, harness her own Shadowshaping abilities, and save her family's past, present, and future.