Tour Schedule: I AM THE TRAITOR by Allen Zadoff

Hey everyone! We are super excited to announce the schedule for the I AM THE TRAITOR Blog Tour which begins on June 8th!

The tour runs from June 8th-12th, and will have one or two stops per day and will consist of a mix of reviews, guest posts, and interviews.

There is also a tour-wide giveaway for 5 complete sets of THE UNKNOWN ASSASSIN Series US Only. So be sure to stop by any or all of the stops for a chance to win. 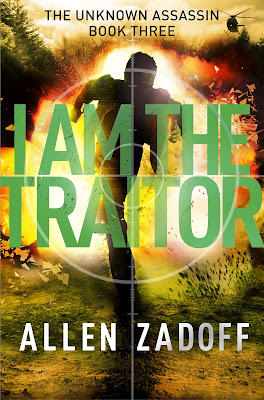 In the third and final installment in the Unknown Assassin trilogy, Boy Nobody is on the run from The Program and uncovers a secret about his past that forces him to decide where his loyalties lie.

The Program has sent Boy Nobody on countless missions, instructed to kill whichever target he was given. But now, after going rogue, he is on his own mission to rescue his friend Howard who was captured by The Program. Boy Nobody manages to free Howard as well as Tanya, a mysterious girl who was being held with him. Howard and Tanya help Boy Nobody collect information about his father, eventually revealing a dangerous secret that teaches Boy Nobody a valuable lesson -- he can't trust anyone.

Allen Zadoff packs the third book of the Unknown Assassin series with even more action, higher stakes, and mind-blowing reveals that will leave readers riveted.