Tour Announcement: WHILE YOU WERE GONE by Amy K. Nichols

Hey everyone! We are super stoked to announce a tour we're hosting for WHILE YOU WERE GONE by Amy K. Nichols which is releasing on August 4th, 2015!

The tour will run for two weeks - from July 27th- 31st and August 3rd- 7th - will have one stop per day and will consist of a mix of guest posts, interviews and reviews.

Review copies will be provided by the publisher, Knopf Books for Young Readers via a Netgalley link.

We are super excited for WHILE YOU WERE GONE's release this August! It sounds amazing! 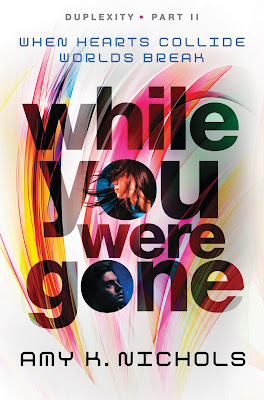 Eevee is a promising young artist and the governor’s daughter in a city where censorship is everywhere and security is everything. When a fire devastates her exhibition—years in the making—her dreams of attending an elite art institute are dashed. She’s struggling to find inspiration when she meets Danny, a boy from a different world. Literally.

Raised in a foster home, Danny has led a life full of hurt and hardship until a glitch in the universe changes everything. Suddenly Danny is living in a home he’s never seen, with parents who miraculously survived the car crash that should have killed them. It’s like he’s a new Danny. But this alternate self has secrets—ties to an underground anarchist group that have already landed him in hot water. When he starts to develop feelings for Eevee, he’s even more disturbed to learn that he might have started the fire that ruined her work.

As Danny sifts through clues from his past and Eevee attempts to piece together her future, they uncover a secret that’s bigger than both of them. . . . And together, they must correct the breach between the worlds before it’s too late.