Tour Announcement: DEAD UPON A TIME by Elizabeth Paulson

Hey everyone! We are super stoked to announce a tour we're hosting for DEAD UPON A TIME by Elizabeth Paulson which is releasing on August 25th, 2015!

The tour will run for two weeks - from August 17th- 21st and 24th- 28th - will have one stop per day and will consist of a mix of guest posts, interviews and reviews.

Review copies will be provided by the publisher, Scholastic.

We are super excited for DEAD UPON A TIME's release this August! It sounds amazing! 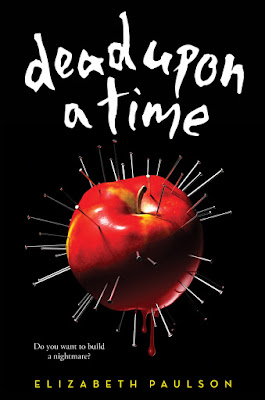 One girl is kept in a room where every day the only food she's given is a poisoned apple. Another is kept in a room covered in needles -- and if she pricks her finger, she'll die. Then there are the brother and sister kept in a cell that keeps getting hotter and hotter. . .

A sinister kidnapper is on the loose in Kate's world. She's not involved until one day she heads to her grandmother's house in the woods -- and finds her grandmother has also been taken. Already an outcast, Kate can't get any help from the villagers who hate her. Only Jack, another outsider, will listen to what's happened.

Then a princess is taken, and suddenly the king is paying attention -- even though the girl's stepmother would rather he didn't. It's up to Kate and Jack to track down the victims before an ever after arrives that's far from happy.