Tour Schedule: A SCHOOL FOR UNUSUAL GIRLS by Kathleen Baldwin

Hey everyone! We are super excited to announce the schedule for the A SCHOOL FOR UNUSUAL GIRLS Blog Tour which begins on May 11th!

The tour runs from May 11th-15th & 18th-22nd, and will have one stop per day and will consist of a mix of reviews, guest posts, and interviews.

There is also a tour-wide giveaway for 10 finished copies of the book!So be sure to stop by any or all of the stops for a chance to win. 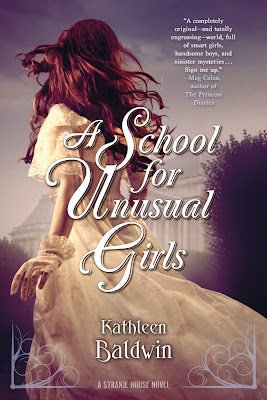 It’s 1814. Napoleon is exiled on Elba. Europe is in shambles. Britain is at war on four fronts. And Stranje House, a School for Unusual Girls, has become one of Regency England’s dark little secrets. The daughters of the beau monde who don't fit high society’s constrictive mold are banished to Stranje House to be reformed into marriageable young ladies. Or so their parents think. In truth, Headmistress Emma Stranje, the original unusual girl, has plans for the young ladies—plans that entangle the girls in the dangerous world of spies, diplomacy, and war.

After accidentally setting her father’s stables on fire while performing a scientific experiment, Miss Georgiana Fitzwilliam is sent to Stranje House. But Georgie has no intention of being turned into a simpering, pudding-headed, marriageable miss. She plans to escape as soon as possible—until she meets Lord Sebastian Wyatt. Thrust together in a desperate mission to invent a new invisible ink for the English war effort, Georgie and Sebastian must find a way to work together without losing their heads—or their hearts...