Hey everyone! We are thrilled to announce a new tour we have here at Rockstar Book Tours for A DEATH-STRUCK YEAR by Makiia Lucier, which releases on March 4, 2014.

The tour will run for two weeks - March 3rd-7th and March 10th-14th - will have one stop each day, and will consist of reviews, guest posts such as Character POVs, Top 10s, Dream Casts or Playlists and interviews.

eARCs of A DEATH-STRUCK YEAR will be made available either through NetGalley or in PDF format to those bloggers who are hosting a review stop. A limited number of printed ARCs are available for bloggers in the US.

The tour will also have an awesome giveaway via a shared Rafflecopter for a signed copy of the book.

If you'd like to be considered to be a stop on this tour, please first sign up as a tour host and then fill out the sign-up form HERE. Sign-ups CLOSED.

A DEATH-STRUCK YEAR sounds amazing. And with the promise of "romance" and the "heartache of loss" this is definitely a book whose release we can't wait for. 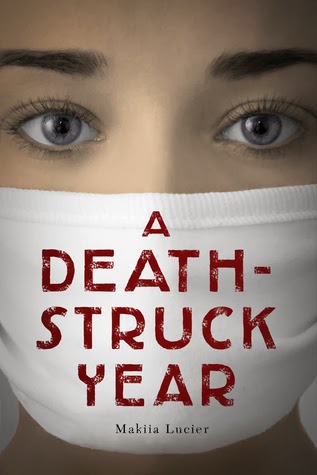 
A deadly pandemic, a budding romance, and the heartache of loss make for a stunning coming-of-age teen debut about the struggle to survive during the 1918 flu.

For Cleo Berry, the people dying of the Spanish Influenza in cities like New York and Philadelphia may as well be in another country--that's how far away they feel from the safety of Portland, Oregon. And then cases start being reported in the Pacific Northwest. Schools, churches, and theaters shut down. The entire city is thrust into survival mode--and into a panic. Headstrong and foolish, seventeen-year-old Cleo is determined to ride out the pandemic in the comfort of her own home, rather than in her quarantined boarding school dorms. But when the Red Cross pleads for volunteers, she can't ignore the call.

As Cleo struggles to navigate the world around her, she is surprised by how much she finds herself caring about near-strangers. Strangers like Edmund, a handsome medical student and war vet. Strangers who could be gone tomorrow. And as the bodies begin to pile up, Cleo can't help but wonder: when will her own luck run out?

Riveting and well-researched, A Death-Struck Year is based on the real-life pandemic considered the most devastating in recorded world history. Readers will be captured by the suspenseful storytelling and the lingering questions of: what would I do for a neighbor? At what risk to myself?

An afterword explains the Spanish flu phenomenon, placing it within the historical context of the early 20th century. Source notes are extensive and interesting.