Hey everyone! We are totally stoked to announce the hosts and schedule for Danielle Ellison's SALT which releases on January 7th.

There will also be a tour-wide giveaway for a SALT necklace and 3 eBooks of SALT.

We think SALT looks like an incredible story! And we can't wait for the tour to start! 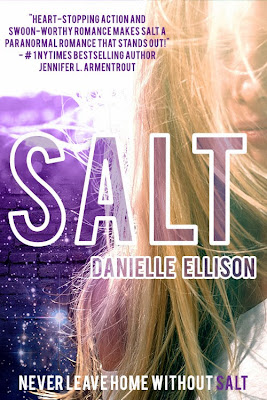 
Penelope is a witch, part of a secret society protecting humans from demon attacks. But when she was a child, a demon killed her parents—and stole her magic. Since then, she’s been pretending to be something she’s not, using her sister’s magic to hide her own loss, to prevent being sent away.

When she’s finally given the chance to join the elite demon-hunting force, Penelope thinks that will finally change. With her sister’s help, she can squeeze through the tests and get access to the information she needs to find "her" demon. To take back what was stolen.

Then she meets Carter. He’s cute, smart, and she can borrow his magic, too. He knows her secret—but he also has one of his own.

Suddenly, Penelope’s impossible quest becomes far more complicated. Because Carter’s not telling her everything, and it’s starting to seem like the demons have their own agenda…and they’re far too interested in her.