Hey everyone! We are totally stoked to announce the hosts and schedule for Joelle Charbonneau's INDEPENDENT STUDY which releases on January 7th.

The tour runs for two weeks - December 30th- January 3rd and January 6th-10th - has one stop per day, and consists of interviews, guest posts, and reviews.

There will also be a tour-wide giveaway for an INDEPENDENT STUDY Prize Pack!

We think INDEPENDENT STUDY is an awesome book! And we can't wait for the tour to start! 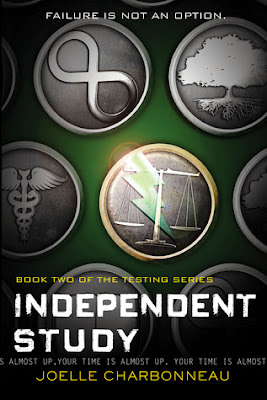 In the series debut The Testing, sixteen-year-old Cia Vale was chosen by the United Commonwealth government as one of the best and brightest graduates of all the colonies . . . a promising leader in the effort to revitalize postwar civilization. In Independent Study, Cia is a freshman at the University in Tosu City with her hometown sweetheart, Tomas—and though the government has tried to erase her memory of the brutal horrors of The Testing, Cia remembers. Her attempts to expose the ugly truth behind the government’s murderous programs put her—and her loved ones—in a world of danger. But the future of the Commonwealth depends on her.