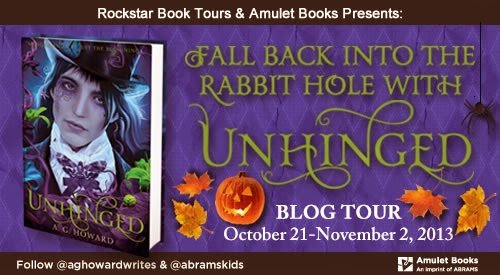 Hey everyone! Oh its a frabjous day here at Rockstar Book tours! We are totally stoked to announce the hosts and schedule for A.G. Howard's UNHINGED Blog Tour!

The tour runs for two weeks - October 21st- November 2nd - and has one stop per day with amazing guest posts from A.G. Howard!

The tour will also include an awesome giveaway for 12 ARC's of UNHINGED, Domestic only and 4 stops will have special giveaways that are open Internationally!

This book is amazeballs, awesome, fantastic, and all the good sparkly things in the world, and we cannot wait for the tour to begin. For now, though, here are the hosts... 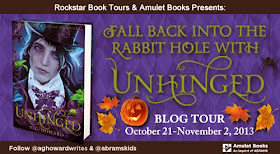 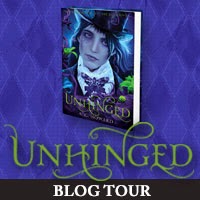 Feel free to grab the badge by the very amazing people at Amulet books to post in your sidebar! 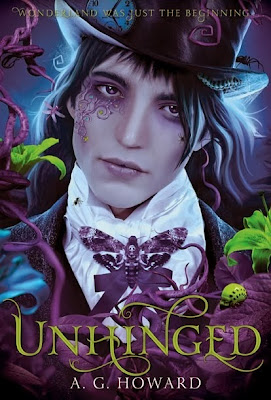 Alyssa Gardner has been down the rabbit hole and faced the bandersnatch. She saved the life of Jeb, the guy she loves, and escaped the machinations of the disturbingly seductive Morpheus and the vindictive Queen Red. Now all she has to do is graduate high school and make it through prom so she can attend the prestigious art school in London she's always dreamed of.

That would be easier without her mother, freshly released from an asylum, acting overly protective and suspicious. And it would be much simpler if the mysterious Morpheus didn’t show up for school one day to tempt her with another dangerous quest in the dark, challenging Wonderland—where she (partly) belongs.

As prom and graduation creep closer, Alyssa juggles Morpheus’s unsettling presence in her real world with trying to tell Jeb the truth about a past he’s forgotten. Glimpses of Wonderland start to bleed through her art and into her world in very disturbing ways, and Morpheus warns that Queen Red won’t be far behind.

If Alyssa stays in the human realm, she could endanger Jeb, her parents, and everyone she loves. But if she steps through the rabbit hole again, she'll face a deadly battle that could cost more than just her head.