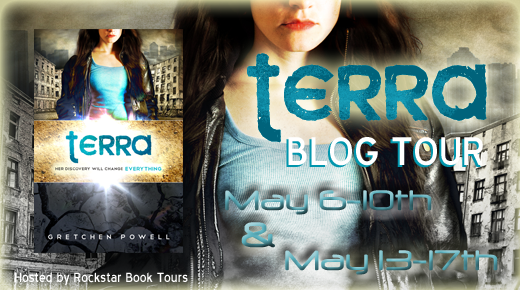 Hi everyone! We are super excited to announce a new tour for Gretchen Powell's TERRA, which released in December.

When we took a peek at the first lines of the description we were instantly hooked. "A broken and desolate Earth. A young girl struggling to survive. A lost boy with a powerful secret. A discovery that will change everything."

The tour will run for two weeks - May 6th-10th and May 13th-17th. There will be a total of sixteen stops on the two-week tour, and the tour will consist of reviews, guest posts and interviews.

The bloggers who are chosen as hosts will be required to come up with guest post topics and interview questions. And for those who are hosting a review stop, an eBook will be made available.

The tour will also have an awesome giveaway for a signed copy of the book and three signed bookmarks that will be shared across all tour stops via a common Rafflecopter.

If you'd like to be considered to be a stop on this tour, please first sign up as a tour host and then fill out the sign-up form HERE. Sign-ups are CLOSED.

We cannot wait for this tour and we are so excited about this first book in author Gretchen Powell's Terrestrials series. 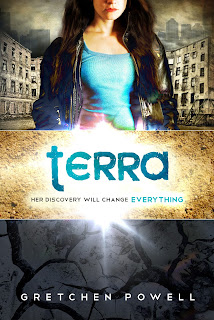 
A broken and desolate Earth. A young girl struggling to survive. A lost boy with a powerful secret.

A discovery that will change everything.

In the distant wake of a plague that has decimated the Earth's population, humanity is split in two: The rich and powerful live in skycities that float overhead, while those who remain on the ground have gathered in settlements strewn across a dying planet. Eighteen-year-old Terra Rhodon is a terrestrial--a denizen of the barren groundworld--who makes her living as a scav. Long abandoned by her father, her caregivers gone, Terra supports herself and her younger brother, Mica, by scouring the earth for discarded scraps and metals to recycle for profit. One day, while on a routine scavenging run, she discovers something that shocks her home settlement of Genesis X-16. When the value of her discovery is revealed, Terra's world is turned upside down.

Terra suddenly finds herself asking questions no one will answer. Her search for the truth leads her to Adam--a beguiling skydweller unlike any she has ever met. But Adam has secrets and a quest of his own, and with him by her side, the world Terra thought she knew begins to unravel. Soon her discoveries unearth a terrifying conspiracy that has the potential to shatter everything--a revelation that will test the bonds of loyalty, family, and love.