Hey everyone! We are super excited to announce the schedule for the OFFICIAL TITANS Blog Tour which begins on February 15th!

The tour runs from February 15th-19th & 22nd-26th, and will have one stop per day and will consist of reviews, excerpts, and interviews. 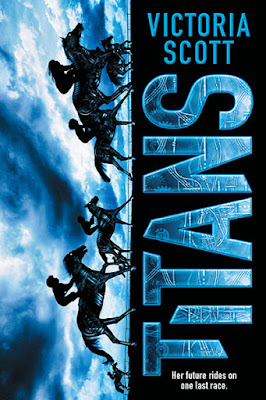 Ever since the Titans first appeared in her Detroit neighborhood, Astrid Sullivan’s world has revolved around the mechanical horses. She and her best friend have spent countless hours watching them and their jockeys practice on the track. It’s not just the thrill of the race. It’s the engineering of the horses and the way they’re programmed to seem so lifelike. The Titans are everything that fascinates Astrid, and nothing she’ll ever touch.

She hates them a little, too. Her dad lost everything betting on the Titans. And the races are a reminder of the gap between the rich jockeys who can afford the expensive machines to ride, and the working class friends and neighbors of Astrid’s who wager on them.

But when Astrid’s offered a chance to enter an early model Titan in this year’s derby, well, she decides to risk it all. Because for a girl from the wrong side of the tracks, it’s more than a chance at fame or money. Betting on herself is the only way she can see to hang on to everyone in the world she cares about.

Keeping her secret is hard enough, but the romance that’s been growing between her and Prince Mati isn’t helping matters. Then Raisa is approached by the Resistance—an underground army of slave rebels—to help liberate Arnath slaves. She wants to free her people, but that would mean aiding a war against Mati. As Raisa struggles with what to do, she discovers a secret that the Qilarites have been hiding for centuries—one that, if uncovered, could bring the kingdom to its knees.