Hey everyone! We are totally stoked to be able to announce a Book Blast we're putting together for author A.R. Kahler for the upcoming Kindle serial release of THE IMMORTAL CIRCUS: ACT TWO, the first "episode" of which releases on June 11th!

If you hadn't followed the tour this past winter here at Rockstar Book Tours for the first book in the series and aren't sure what a Kindle serial release is, basically every two weeks an "episode" from this second book in this series will be available for automatic download for those who purchase the book until all five episodes are downloaded and the book is complete.

We know this is super, super quick, but we're looking to have the blast go out on Tuesday, June 11th at 12:01 a.m. Eastern as we wanted to help spread the word about this awesome book on its release day.

If you'd still love to participate but won't be able to get your post up on Tuesday, posting a little bit late - any time that day or the next - will be fine, too.

The sign-up for the reveal will be super simple. We will provide the cover, the blurb, the guest post, the author's bio and photo, the giveaway details and all the links in a Word document.

We will send everything you need for your posts on Monday, June 10th at 3 p.m. Pacific, just after sign-ups close. If you'd like it a little bit earlier or if sign-ups have closed and you would still like to participate, just email us!

THE IMMORTAL CIRCUS: ACT TWO is the second book in author A.R. Kahler's The Immortal Circus series and we are so excited for it's Kindle serial release this Tuesday! And as I (Rachel) had the chance to read it early, I just have to say that this sequel is even more amazing than book one. 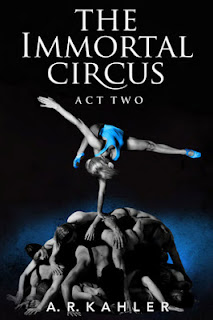 
Vivienne is almost content with her new life in the Cirque des Immortels. She has moved up from selling cotton candy to telling fortunes, she has a gorgeous, magical boyfriend, Kingston…and no one has been murdered since the clash between the otherworldly Courts. Her life under the faerie big top would be perfect, in fact, if not for the nightmares and visions that compel her to seek and confront her half-remembered past. But for Viv, not knowing her past may well be a blessing. There's a reason she ran away. But can she truly escape herself?